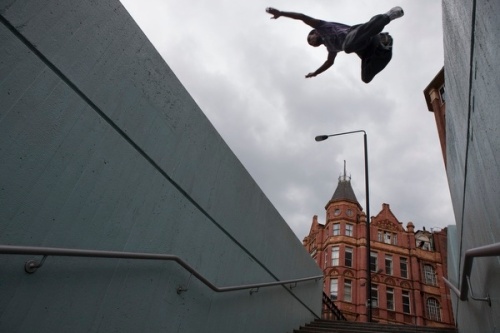 Photography category winner of the Vauxhall Collective Bursary, street photographer Matt Stuart will have his work on show in Derby from 13-19 November. Stuart’s quirky observational photos often use humour, so this show promises to be engaging. Plus, news just in that, sadly, Photo Miami 2010 has been cancelled due to lack of sponsorship. More below.

Stuart was commissioned by the car company to create a series of photographs as a response to this year’s theme, The Great British Weekend. Travelling in a new Vauxhall Astra, he captures the life of enthusiasts who spend weekends pursuing their hobbies and passions, Stuart’s, we learn from the press release, include book collecting and cycling…

A new survey of 46 contemporary street photographers from around the globe, including fellow London-based In-Public members, Nick Turpin and Nils Jorgensen. Stuart’s London streets shot grace the front and back covers.

There’s a link to a short interview (two and a half mins) with one of the editors, Sophie Howarth, on Nigel Warburton’s website, art and allusion.

END_OF_DOCUMENT_TOKEN_TO_BE_REPLACED

I had the pleasure of seeing a couple of wonderful pieces from this year’s Animation graduates at the Royal College of Art. In particular – and one to watch – is the highly talented director and editor Magali Charrier who worked as an editor on photographer Tim Hetherington’s three-screen audio-visual piece, Sleeping Soldiers.

In the podcasr, Charrier talks to me about using the Canon 7D and the influence of Francesca Woodman. Follow this link, 12 Sketches on the Impossibility of Being Still, to download the audio interview -it’s just over 10 minutes long.

If you didn’t get to the Tate Modern’s recent three-day symposium Agency and Automatism: Photography as Art since the 1960s (10-12 June), don’t worry. You can still get a flavour of the event by tuning into philosopher Nigel Warburton’s podcast, Thomas Demand –  Absence and Presence. There’s also a link on his Art and Allusion website to the Demand image he discusses. The talk is about 20 mins long.

© Gerhard Richter, courtesy of the artist, and PhotoEspana 2009. From his Overpainted Photographs - family album photos that have been overpainted, which were on show at the Fundacion Telefonica, Barcelona as part of this year's Everyday themed festival. © photo Miranda Gavin, taken at PhotoEspana 2009

If you like your art appreciation served after hours, with a smile, then look no further than the Tate Modern and 7 Ways of Thinking About Art which “explores the philosophical basis of our attempts to understand works of art”. This popular course (deservedly so) is led by philosopher and Open University senior lecturer Nigel Warburton (virtual philosopher) as part of Tate Modern’s (London) Public Programme schedule. What I like about Nigel Warburton’s approach to philosophy, which may be partly due to his role in the OU, is the way he has helped open up the subject making it more accessible through, for example, using clear language. Warburton takes complex ideas, untangles and then contextualises them  – all the while instilling students (even ones new to philosophy) with the confidence to approach work and articulate responses for themselves.